The German can still clinch the title with a race in hand if he wins at Sao Paulo’s Interlagos circuit in Brazil in two weeks’ time. 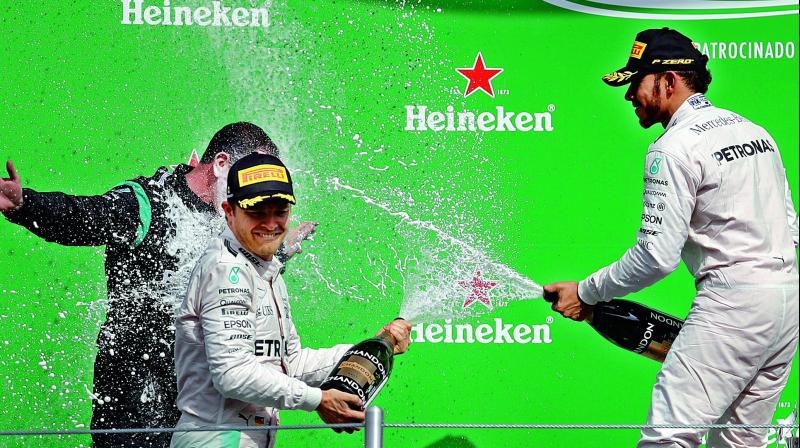 The pole-to-flag victory was the triple world champion’s eighth of the season and put him level with France’s Alain Prost in the all-time lists of winners. Only Michael Schumacher (91) has more.

Rosberg, who would have clinched the title had he won and Hamilton finished 10th or lower, crossed the line 8.354 seconds behind to anchor champions Mercedes to a sixth one-two finish of the season.

The German can still clinch the title with a race in hand if he wins at Sao Paulo’s Interlagos circuit in Brazil in two weeks’ time. “Lewis has been too fast this weekend,” said Rosberg.

The race was largely processional until it exploded into controversy in the final laps with Ferrari’s Sebastian Vettel finishing fourth and then promoted to the podium before demotion back to fifth.

Red Bull’s Max Verstappen was third on the track but was then handed a five second penalty for gaining an advantage by going off, pushing him down to fifth before Vettel’s penalty for dangerous driving lifted him back to fourth.

That left Australian Daniel Ricciardo in third place but without a podium appearance and the chance to pour the champagne into his boot for another trademark ‘shoey’ celebration.

The Vettel-Verstappen-Ricciardo controversy provided the major talking point of the day, with bad language flying and accusations going to and fro.