She said Obama was not getting the credit he deserves for everything he did to save US economy and for putting the country on ‘right track’. 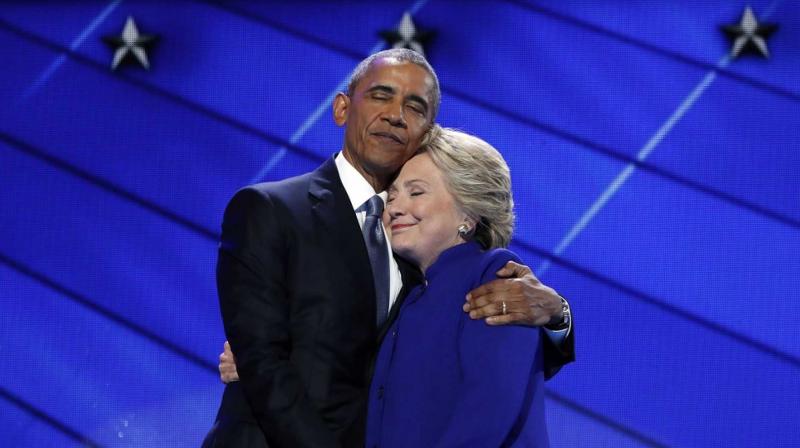 Washington: Democratic presidential nominee Hillary Clinton has said she is “grateful” for the “amazing” support she got from Barack Obama and the First Lady Michelle and acknowledged that the outgoing US president is leaving “big shoes” to fill.

Clinton said Obama was not getting the credit he deserves for everything he did to save the US economy and for putting the country on the “right track”.

“I am so grateful for President Obama’s leadership. I love it when he talks – and I’m so grateful for all of his support in this election. Both he and Michelle have been amazing on the campaign trail,” Clinton said at an election rally in Philadelphia yesterday.

“I love it when the president talks about supporting me, and he said he wants to “pass on the baton” to me. And I’m just hoping he will bend low enough that I can reach it, because he’s a tall man. I’m not sure. So he’s going to have to bend, and I’m going to have to stand on my toes. Those are big shoes to fill,” she said.

Clinton, 69, said Tuesday’s US general election was not about any individual, but about choosing “hope over fear, unity over division and love over hate.”

She laid out the stakes in the election, calling it not just a choice between two candidates but between two very different visions for the country.

“This election is about much more than the two candidates. Our names may be on the ballot, but make no mistake: everything you care about, everything that I care about and I’ve worked for is at stake,” she said.

“On Tuesday, we face a test of our own. This election is about much more than the two candidates. Our names may be on the ballot, but make no mistake: everything you care about, everything that I care about and I’ve worked for is at stake,” Clinton said.

“This election is about doing everything we can to stop the movement to destroy President Obama’s legacy – in fact it is about building on the gains and the progress we’ve made in the last eight years,” she said.

Clinton vowed to break down all the barriers that are holding Americans back and outlined her commitments to end-to-end criminal justice reform, more investment in underserved communities, common sense gun reform so African American men’s lives are not disproportionately cut short by gun violence and a concerted effort against systemic racism in all corners of the society.

“We have got to continue to take on the problem of systemic racism, to rid ourselves of deep-rooted injustice, hatred, and fear. We need end-to-end reform in our criminal justice system – with real follow through. I want us to get rid of what is called the ‘school to prison pipeline’ and replace it with the ‘cradle to college pipeline’,” she said.

Around 100 missing after migrant boat capsizes in Mediterranean Sea