Zaira confessed that when she was informed about her selection for the role of Aamir Khan’s daughter, she couldn’t believe it. 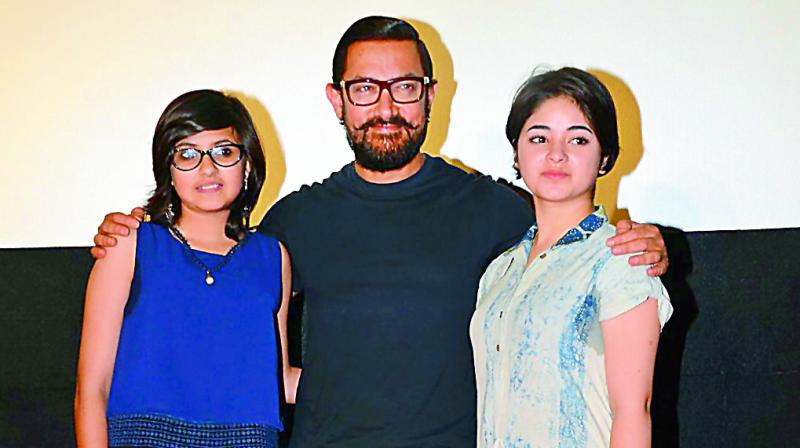 The first song Haanikarak Bapu from Aamir Khan’s Dangal was released on Saturday. At the launch, actresses Suhani Bhatnagar and Zaira Wasim were also present and looked quite excited.

Did the girls find Aamir a “Haanikarak Bapu” off  screen too? Says Suhani, “Off screen, he is very humble and respects everyone. It was not only fun working with him but it was also a wonderful learning experience.”

Suhani remembers how her mum was more excited than she was. “After the audition, she kept asking my dad every day, ‘Call aaya kya?’ But once I got selected, I was sure it would need hard work and serious practice with our scenes as we were to work with the perfectionist,” says Suhani.

Zaira confessed that when she was informed about her selection for the role of Aamir Khan’s daughter, she couldn’t believe it. “I was so nervous on my first day. I kept thinking that I have to share the camera space with Aamir. In my heart I thought I couldn’t do it! But I received such a positive reception from Aamir that I instantly became comfortable. After that, I worked with my heart and soul. I don’t think we could have asked for anything more than this debut film. It’s like a dream come true for us,” Zaira says.

Exclusive: Deepika’s unusual look for a mysterious project will leave you guessing!