Tulsi Gabbard, the first Hindu member of the US Congress, is reportedly under consideration for UN ambassador. 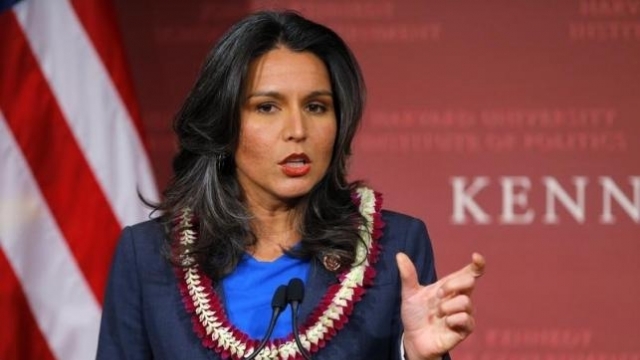 A steady stream of Cabinet hopefuls made their way across the opulent lobby of New York’s Trump Tower to meet with President-elect Donald Trump on Monday, spurring continued speculation about the policies he will put in place when he takes office on Jan. 20.

“This is what outsiders do. Politicians try to keep everything behind a secret hinged door. He’s been somebody who’s been very transparent throughout,” Kellyanne Conway, a senior adviser, said in a Fox News interview.

Trump spoke often with reporters camped out at his New Jersey golf course over the weekend about his deliberations, but has not yet given a traditional news conference to talk about his priorities. He was holding an off-the-record meeting with a group of television anchors and executives on Monday afternoon.

The president-elect was not expected to announce new Cabinet picks on Monday, but later in the day planned to release a video on what he hopes to work on first with the Republican-controlled U.S. Congress, his spokesmen told reporters.

Trump planned to decamp from his Manhattan office tower for Mar-a-Lago, a golf resort he owns in Florida, on Tuesday or Wednesday, where he will spend Thanksgiving on Thursday, a spokesman said.

Vice President-elect Mike Pence will travel to Mississippi later this week for the holiday, where his son Michael, who is in the Marines, is stationed.

Trump’s first meeting of the day was with Iraq War veteran Tulsi Gabbard, a Democratic representative from Hawaii who backed US Senator Bernie Sanders in his unsuccessful 2016 Democratic presidential primary campaign against Hillary Clinton.

Gabbard, who made headlines after she quit the Democratic National Committee in February to endorse the senator from Vermont, would be first on Trump’s meeting list, transition officials said.

Gabbard, the first Hindu member of the U.S. Congress, has veered from Democratic Party positions at times, backing policies cracking down on immigration to the United States by Muslims in particular.

In November 2015, she was one of a few dozen Democrats who joined Republicans to pass a bill mandating a stronger screening process for refugees from Iraq and Syria seeking to enter the United States. In 2014, she called for a rollback of the visa waiver program for Britain, Germany, France and other European countries with what she called “Islamic extremist” populations.

Republican Governor Fallin told reporters she was not offered a position, but discussed “a wide range of topics” with Trump. Her spokesman said that included a focus on the Interior Department, an agency whose mission includes oversight of oil and gas leases on public lands.

Former Republican Senator Scott Brown exited Trump’s golden elevator and told reporters he had a “great” meeting about veterans’ issues with Trump. “He’s obviously going to take my application or interest under consideration, and I’m glad that he called and he’s going to obviously meet other folks, and we should know probably after Thanksgiving,” Brown said.

Trump, a New York businessman who has never previously held public office and who was the surprise winner over Clinton in the Nov. 8 election, has so far chosen three senior leaders of his national security and law enforcement teams.

Over the weekend, Trump held court at his golf resort in Bedminster, New Jersey, where he conferred with retired Marine Corps General James Mattis, a contender for defense secretary; Jon Gray, a board member of the Blackstone Group, in the running for treasury secretary; and former Massachusetts Governor Mitt Romney, a fierce Trump critic who now is under consideration for secretary of state. “We really had some great meetings, and you’ll be hearing about them soon,” Trump said on Sunday.

Airtel Thanks with 2000 Rs along with a Smartphone

Scared of Aadhaar misuse? Here’s how you can lock your biometrics now