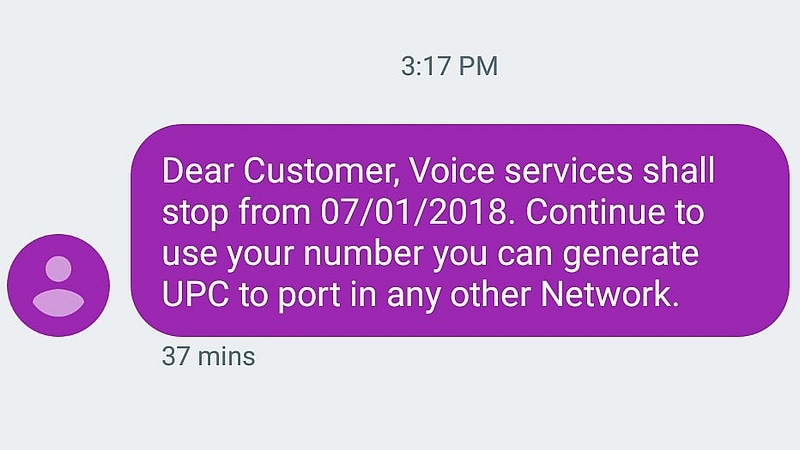 2018 has just started and there is already a hoax SMS doing the rounds, targeting telecom subscribers. The SMS misinforms telecom subscribers that voice services on their number will stop from January 7, and asks them to port their number to other networks. This message is being sent to users of all telecom operators and in various circles going by complaints from consumers on Twitter.

Interestingly, the message asks users to port their number to “any other network” by generating a UPC (Unique Porting Code), and does not name any particular operator they should port to. Irate customers targeted by the SMS have, unsurprisingly, taken to Twitter to get some answers around the matter.

Telecom companies such as Jio, Vodafone and Idea have started responding to customers’ queries around the SMS, denouncing the message as spam and asking users to ignore it. An Airtelrepresentative also confirmed to Gadgets 360 that the message is spam. Tata Docomo and BSNLsubscribers have received the message too, going by the tweets.

While January 7 is a fake deadline, there is another deadline mobile users in India have approaching, that of linking their number to Aadhaar for SIM re-verification. Customers originally had till February 6, 2018 to complete the SIM re-verification, but the last date was later revised to March 31, 2018 for those who do not have an Aadhaar number yet by an order of a 5-judge bench of the Supreme Court. Aadhaar holders need to verify their SIM by February 6. Users originally had to go to retail stores run by the operators to complete the process, but now the Aadhaar-mobile number SIM re-verification can be done via IVR.

Uber Gift Cards for rides and Uber Eats, How to avail it